Writing with color is an attitude that one can see in many aspects of Carla Accardi’s work, from the horizontal position with which the artist creates her canvases - set on a table or on the ground - which reflects the very act of writing, to the amplifying manner in which the titles denote a metalinguistic function. Beginning in the 1980s, poems of Dino Campana, Daniele Pieroni, Francesco Serrao, Andrea Zanzotto, Valentino Zeichen and the verses of artist Bizhan Bassiri, are sources of inspiration for the titles of Carla Accardi’s works, allowing her to create lively dialogue between art and poetry. Words and signs are in constant relation to one another.

The central part of the show is occupied by Fregio from 2004, a series of 15 ink drawings on paper which dialogue directly with a composition by Valentino Zeichen. The relationship between each individual drawing and the poet’s corresponding verse becomes a continuum between text and image, between poetry and sign. By bringing together technical features, from the chiaroscuro to the negative, with mysterious traces of semantic meaning, Accardi and Zeichen generate a musical sound, a meter of signs. Fregio reveals the perfect and mysterious synchronicity of the poetic verse which can be converted into signs.

In Stella (Dieci triangoli rossogialli), Parentesi n.1 and Parentesi n.3, the artist creates and abstraction of painting technique, by using typographical symbols to generate a metalanguage which alters its logical structure. This anti-pictorial attitude can be found in the artist’s work beginning from the 1950s. The direct and concise relationship with the content and the continuous attempt at subtraction and simplification are made manifest by the absence of color, to the point of subverting the painting support.

With the radical use of sicofoil, in the mid-1960s, Accardi abandoned the canvas and put the focus on the frame, using it as new a support for the painting. The idea of surface disappears and the sign is freed from its structure. Stella (Dieci triangoli rossogialli) graphically recalls the shape of an asterisk and its plastic surface becomes a protective element for the painting. We’re in 1981, shortly before the series of the Parentesi, a period that marks the return to canvas as a surface that maintains its “transparencies” through the use of raw fabric.

In Soli impigliati in frange e lappole andLuce crescente, both from 1997, Accardi returns to the sign of the 1950s, enlarging it and inspecting it in all of its individual elements. The macro-signs float freely in the space, as though they were words. Accardi extracts her signs like the phrases from poems.

In the work Blu su bianco from 1998, the design becomes the negative part of the painting. Language is presented in its conceptual construction in Si sdoppia e ricompare, a title which comes from a poem by Valentino Zeichen, both from 2011.

Poetry and Carla Accardi’s work share an incredible capacity for extremely direct communication, which however never frames the content in a closed form. Everything is open to the reconfiguration of a painting that becomes the property of whoever is reading or looking at it. Perhaps in this intense dialogue between signs and words we may even invert our senses, observing Accardi’s titles and reading her works. 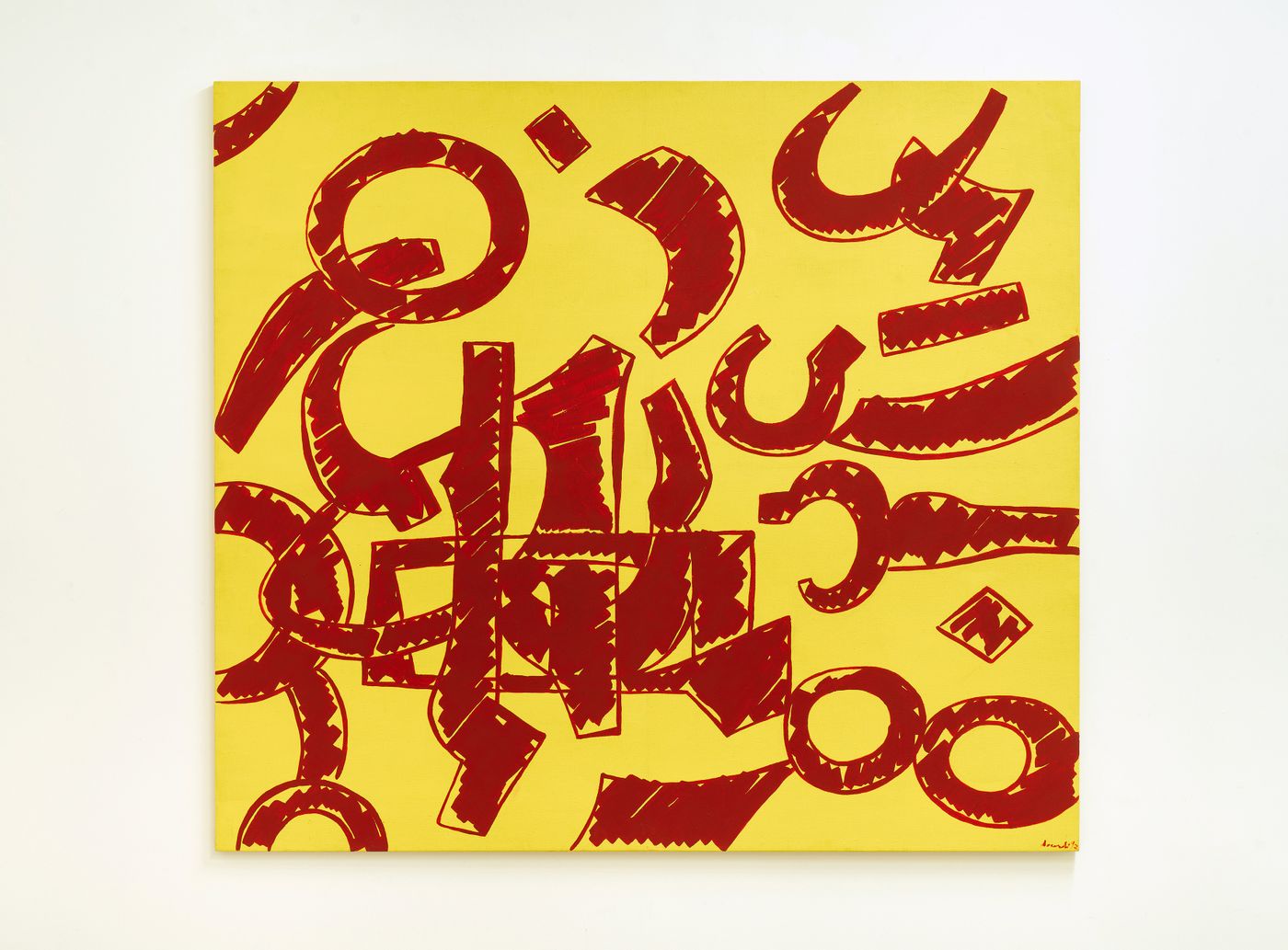 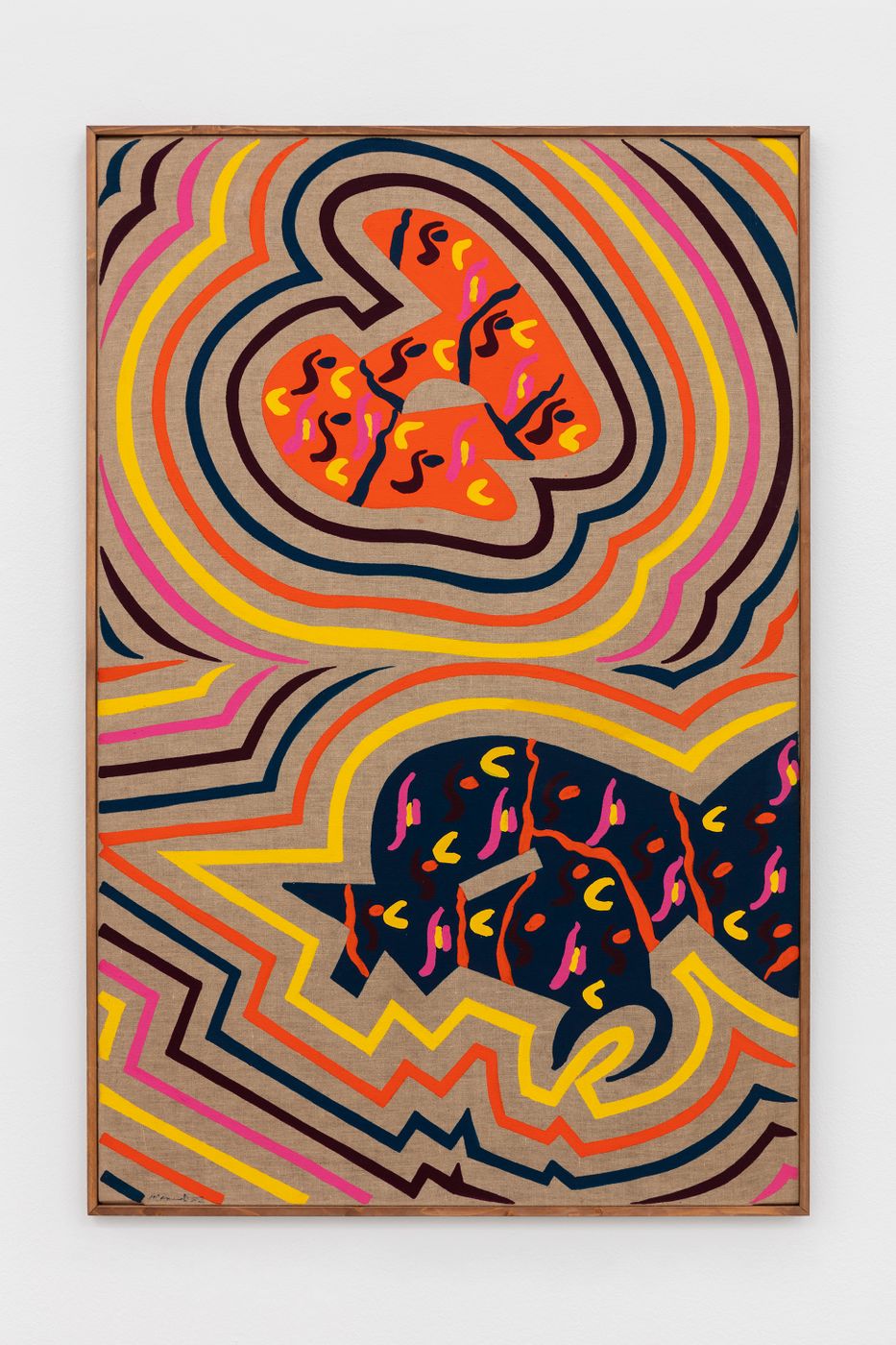 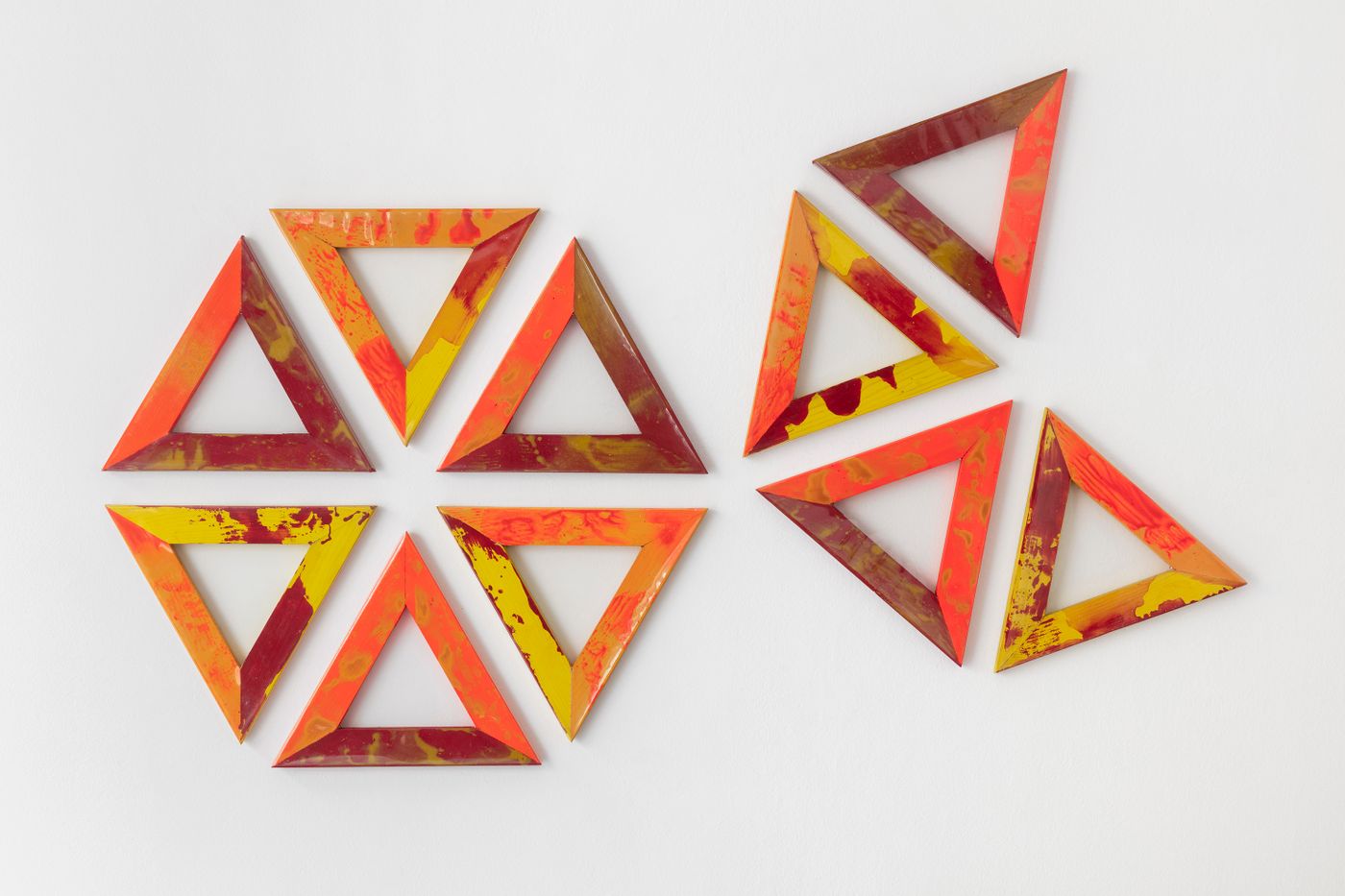 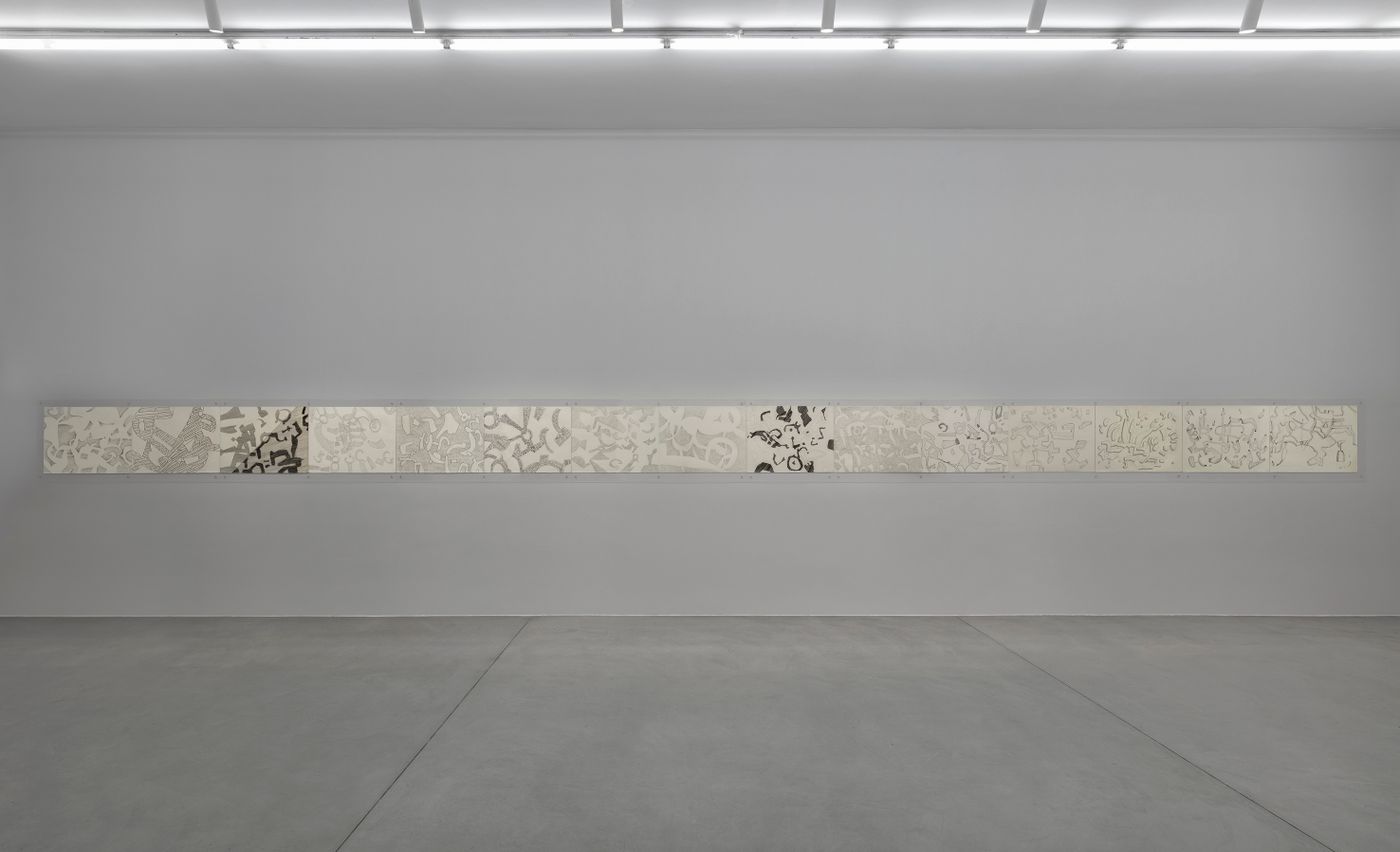 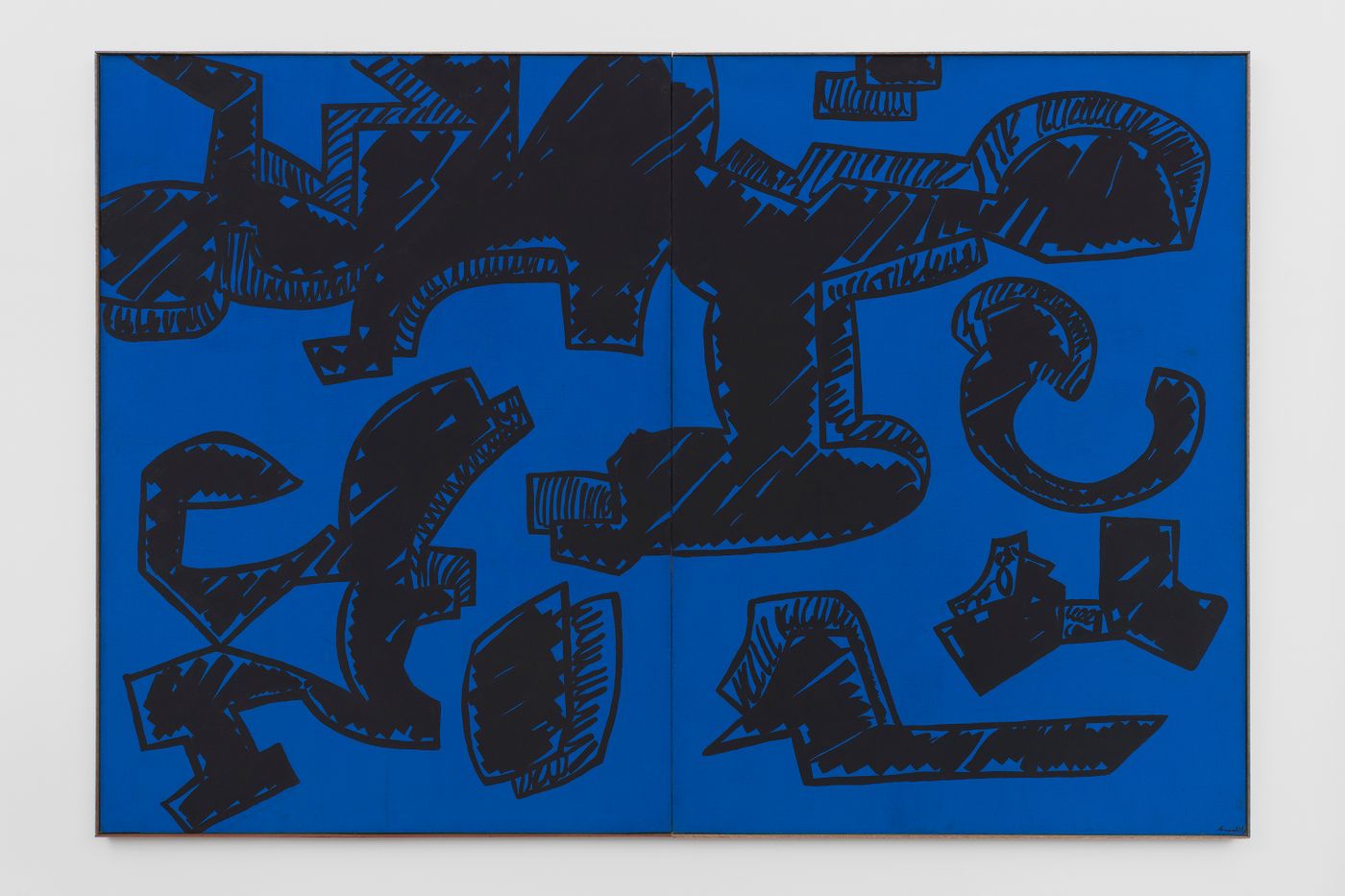 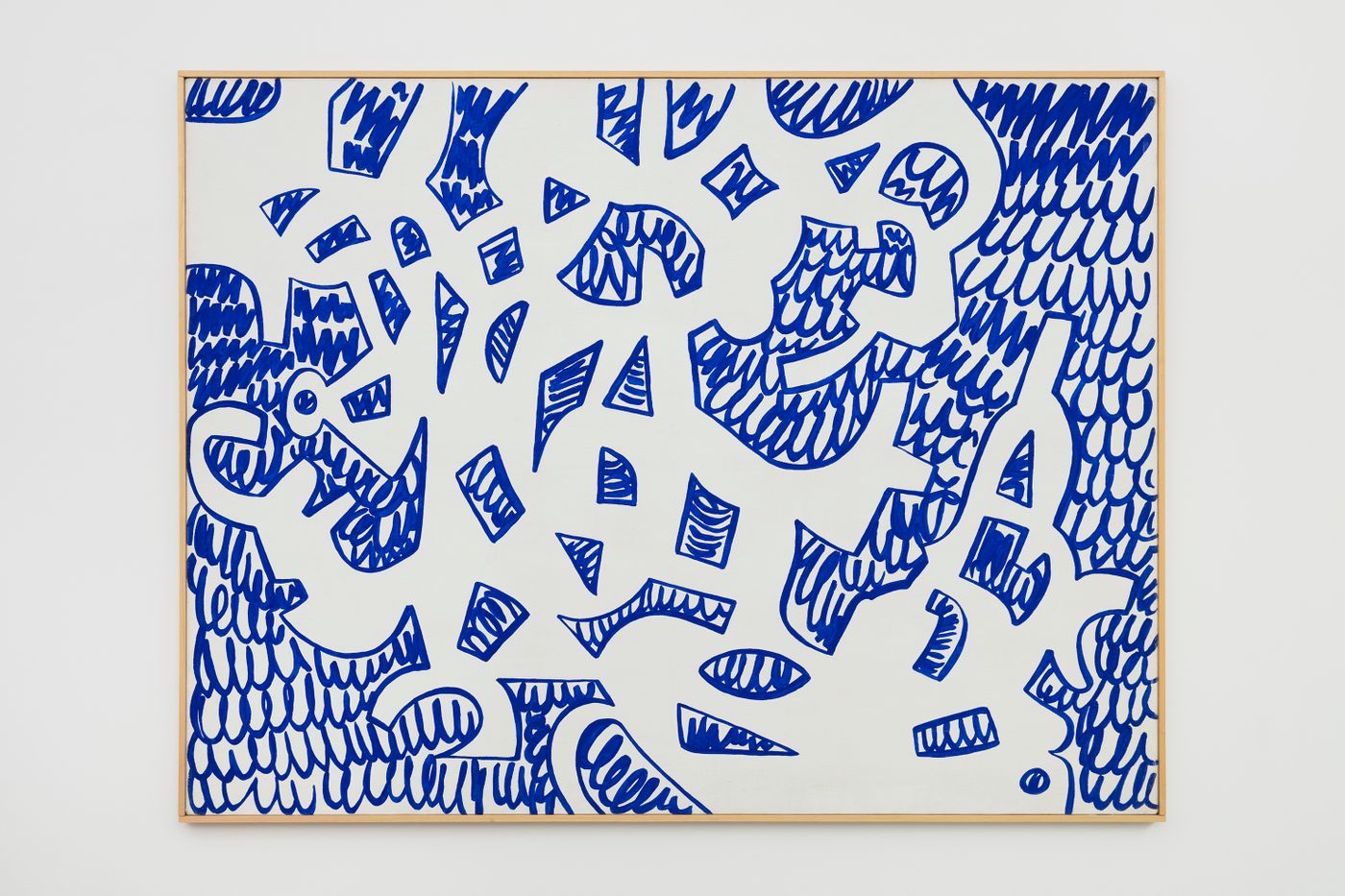 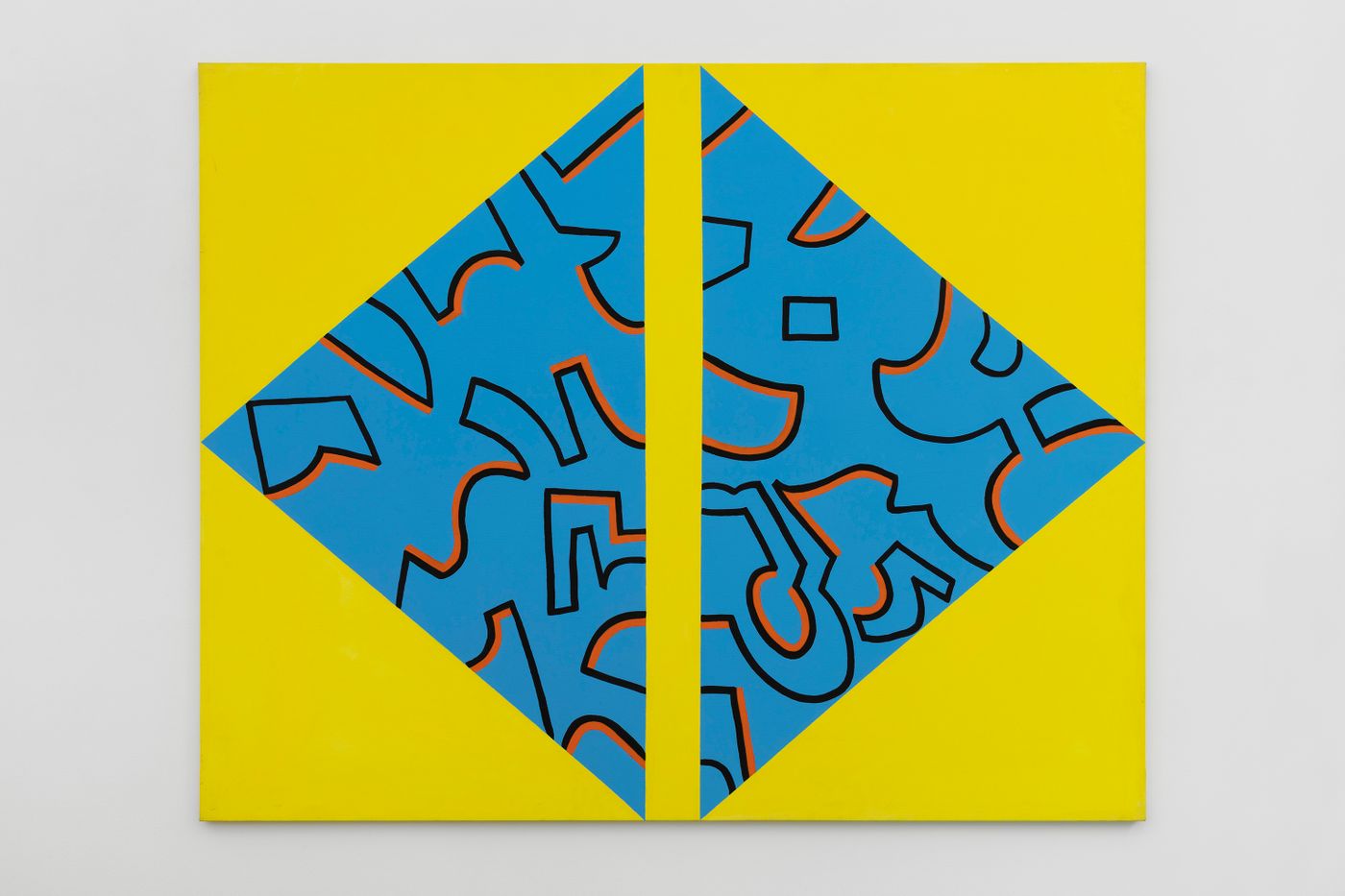 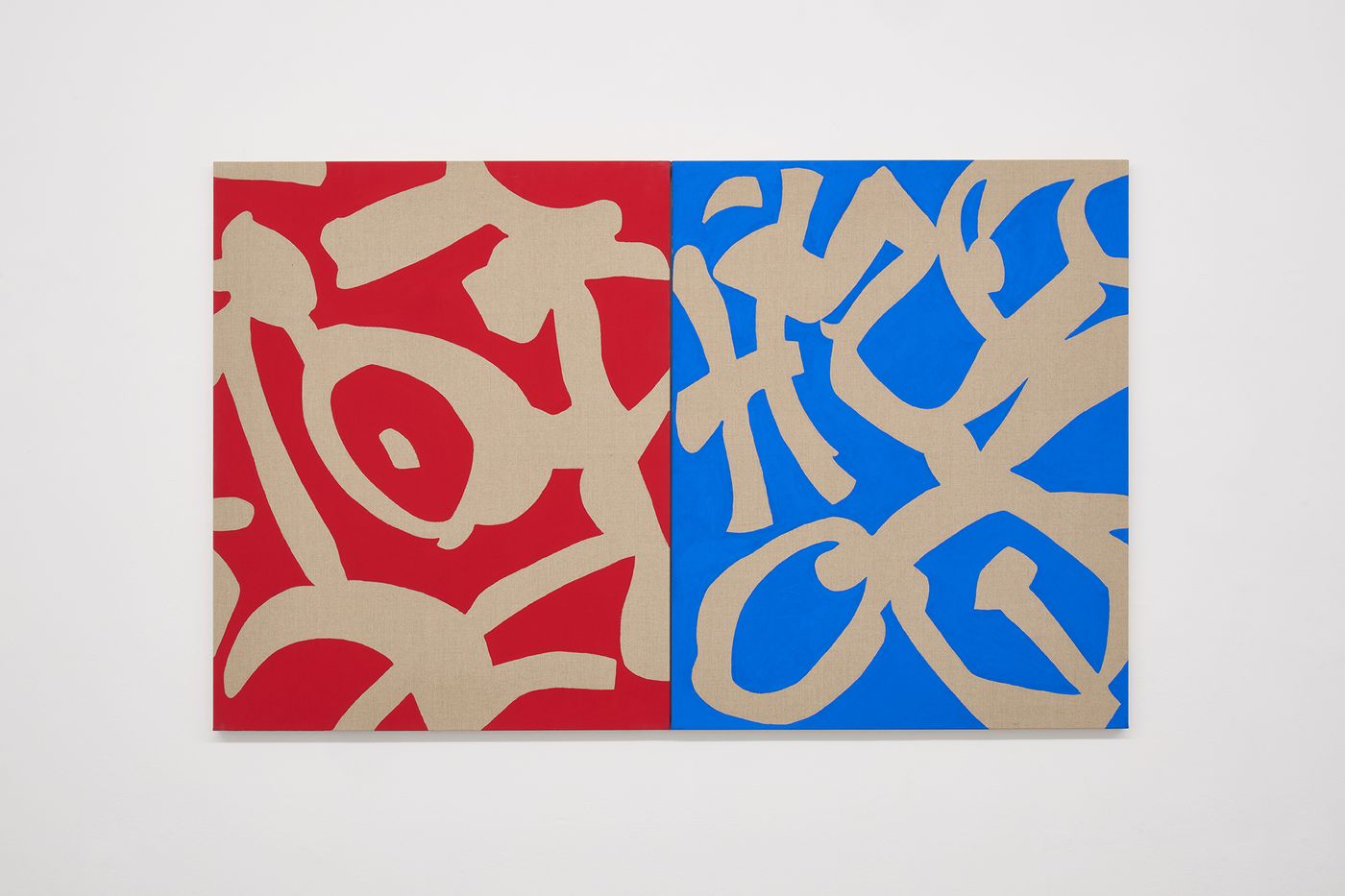 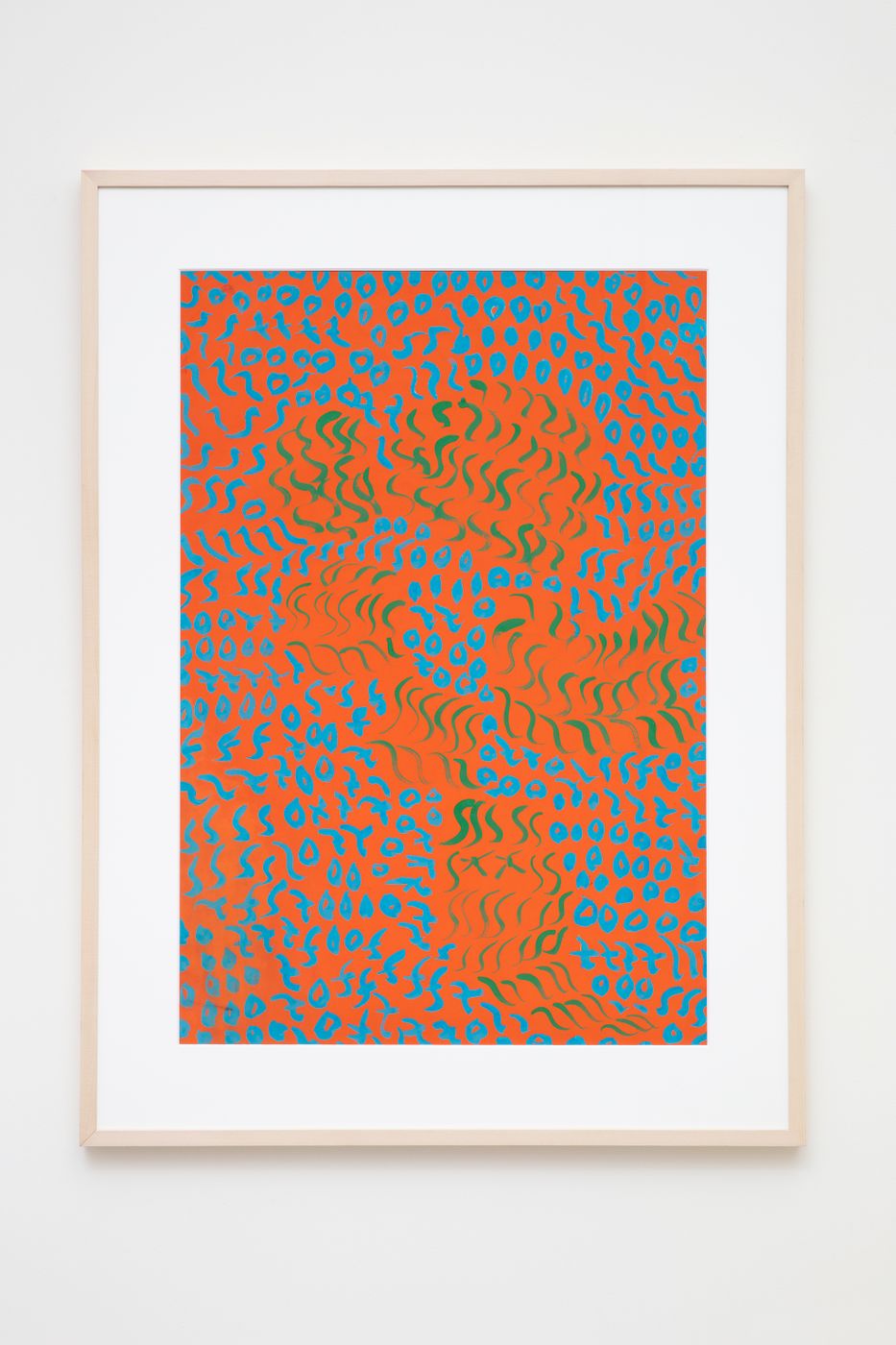 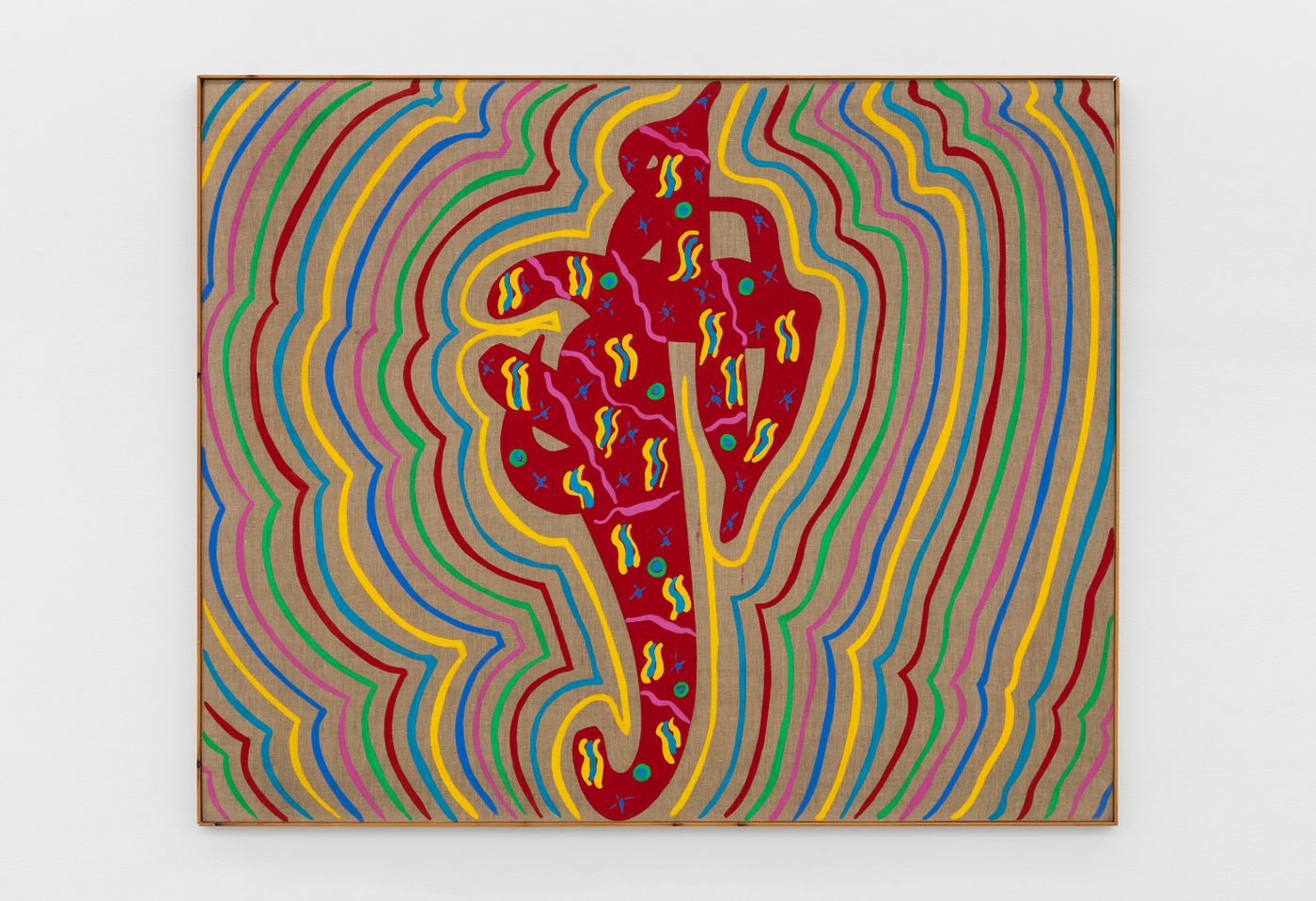